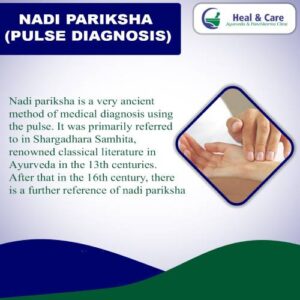 In Ayurveda, the Indian medical system Nadipariksha is term used for the pulse diagnosis. It is a very ancient method of medical diagnosis using the pulse. It was primarily referred to in Shargadhara Samhita, renowned classical literature in Ayurveda in the 13th centuries. After that in the 16th century, there is a further reference of nadi pariksha. It gives a good relation of nadis & the tridoshas. There are certain rules to be followed by the practitioner & the patient to initiate the pulse diagnosis. Diagnostic variables in Ayurveda are Vata, pitta & Kapha. This is a non-invasive as well as a unique diagnostic method that gives an idea about the dosha state. It is widely used by expert Ayurveda practitioners to assess the physiological as well as the psychological state of the patient. Ayurveda has ground experience in Nadeparieksha with a history of 1000 years. And it is very much dependent upon the skill of the physician.

These days, there is very progression in the field of pulse diagnosis in Ayurveda, emphasizing the tridosha locations. The gati, speed & stability of Nadi itself is a science as well as art. It requires great mastery for accurate diagnosis. The parameters like the speed, stability & gati vary with the vitiation of the doshas in the body. It can be identified by placing the fingers in the region of the radial artery(mostly radial artery is used). Various studies have been carried out by assessing the pulse patterns of the normal person as well as diseased individuals. The rate, rhythm, movement, blood vessel wall consistency, force, & temperature were studied concerning the Vata, pitta & Kapha doshas as a part of researches. Based on the pulse diagnosis, the physician designs the customized treatments as well as the therapeutic processes. They also recommend the best available diet & lifestyle for restoration of health

Pulse parameters to be noted

In our science, pulse movement or the gati can be analyzed by comparing it with some birds or reptiles. This is a very unique way of assessing Vata, pitta & Kapha dosha. In the medical literature, the pulse having the predominance of Vata dosha is compared to the movement of snake or leech. The zigzag, as well as the curved movement, is predominantly seen. For pitta predominance, the pulse is compared to the movement of the manduga or frog. It indicates the hopping & jumping nature of the frog. In the case of Kapha dosha, the movement resembles a swan, or it is referred to as manda gati or hamsa gati. So, a wise physician can assess various dosha involvement using this parameter. If there is the involvement of more than one dosha, there will be a mixture of these characteristics accordingly. For example, if there is Vata- pitta predominance, the pulse movement will be in zag as well as jumping or hopping accordingly.

If an individual has high anger or lust, the speed is high. On the other hand, if a person is sad or fearful, the pulse becomes slow. Also, if the digestion is weak, the speed becomes invariably low. And when there is active digestion, there is the normal speed in the pulse. The pulse wave velocity in a normal person is 5-15m/s. It is also a great indicator of cardiovascular diseases in persons as per the clinical studies. If the speed is high, the dosha involved is vata, if the speed is medium, pitta is predominant & if the velocity is low, the dosha involved is the Kapha.

Stability of the pulse

This is a very important feature, If the pulse is intermittent &is located in any other locations other than the normal site, then it is fatal.The stability is attributed to the physiological as well as the psychological status of the individual. In a normal individual, the pulse is steady as well as strong. But in a hungry person, it is in an irregular pattern.

The arterial wall becomes hard & rough if there is vitiation of Vata dosha. So as a result, the blood flows at a very high speed, hence the vata pulse is fast. This is very clearly mentioned in the different Ayurveda texts.

Locations of pulse, the pulse points

Ayurveda emphasizes mostly the radial artery for the diagnosis purposes for finding the dosha vitiation. There are a total of 8 points described as pulse points in our science. Two at the neck region, 2 at the radial region, 2 at the ankle & 2 at the nasal region. The fever, lust, sorrow is mainly detected from the pulse points in the neck region. Also, any ailment in the region of the eyes, head & ears is attributed to the nasal pulse point. The health status, fever, wellbeing is assessed from the ankle pulse. Along with radial arteries, the other pulse points are equally important for the diagnosis as well as treatment of diseases.

Kapha dosha is predominant usually during the start of the day, so the pulse check in the morning will have the influence Kapha. Likewise, pitta in the midday & Vata during the late evening hours. Nadi pareeksha has to be done on empty stomach preferably during the early morning hours. It can also be done after 3 to 4 hrs. of food intake. It is not recommended to do during the process of digestion as the metabolic functions disrupt the diagnosis.